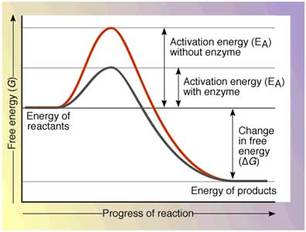 Enzymes are part of the group of chemicals called proteins. They are  any class of nitrogenous organic compounds which have large molecules composed of one or more long chains of amino acids. Proteins, along with carbohydrates and fats, are the chemicals that make up most of the diet of animals. Proteins are made of amino acids, of which 20 different kinds exist in human cells.
Essentially there are two groups of protein: fibrous and globular.

These essential functions make proteins very important. Proteins are coded for by DNA, with one gene of DNA coding for one specific protein; they are synthesised by ribosomes. Enzymes act as biological catalysts, controlling the speed of chemical reactions in all organisms. Enzymes increase the rate of chemical reactions- without them, metabolism would take place too slowly for life to exist. Chemical reactions only occur when the enzyme and substrate collide in the correct orientation with the minimum activation energy. Energy enables a lower activation energy requirement for the reaction by providing an alternative pathway for the reaction.
Metabolism (metabolic reactions) refers to all the chemical reactions occurring in a cell (e.g DNA replication, protein synthesis, respiration, photosynthesis). All the metabolic reactions of a cell are controlled by enzymes.

Enzymes are specific, i.e one enzyme catalyses (increases the rate of a chemical reaction without itself undergoing any permanent chemical change) only one type of reaction. An enzyme is usually named after the substance it catalyses, by having the suffix "-ase" added, for example:

The reason that enzymes are specific relates to their shape. Each enzyme has a particular shape, determined by the sequence of amino acids that it is made of. The amino acids in a protein may be cross-linked by hydrogen bonds (in some cases sulfur bonds), and this is what gives the protein its distinctive shape.
The shape of the enzyme in an area known as its active site corresponds to that of the substance(s) it catalyses- binding to the protein or other substance during a reaction in the lock-and-key model of enzyme action. In the way that a key fits into a particular lock, so only one specific substrate (molecule which an enzyme acts on) fits into the active site of the enzyme.
Another way of enzymes is when before binding, the substrate molecules and enzymes do not exactly fit each other. As the enzyme and substrate fit together (forming the enzyme-substrate complex), chemical bonds form or are broken. The enzyme's active site changes it's shape slightly (through the weak hydrogen bonds that hold the shape) when combined with the substrate to fit (called an induced fit). This distorts the substrate molecule(s), making reactions more likely (the more accepted model of enzyme action). The final product afterwards is released and the enzyme returns to its previous shape. Different molecules cannot induced a fit with the enzyme.
Enzymes are not consumed or broken down in reactions, so one enzyme molecule can catalyse the same reaction many times and do do at a vary fast rate (e.g peroxidase in liver cells can catalyse the breakdown of several million hydrogen peroxide molecules into water and oxygen every minute. Hydrogen peroxide is a toxic substance that harms the liver/body unless it is broken down rapidly into water and oxygen which the body can use).  This saves the cell resources and energy from not having to constantly synthesise new enzymes. The enzyme provided the template or "work bench" for substrate molecules to react on.
Because their shape is maintained by weak hydrogen bonds, enzymes as susceptible to denaturing at high temperatures. As the hydrogen bonds are broken and the enzyme loses its shape, it can no longer catalyse reactions. 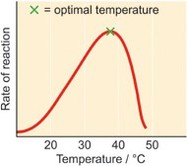 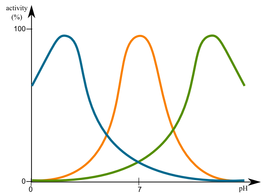 pH
Most enzymes work with cells, so their optimum pH is approximately 7 (i.e close to neutral); exceptions are the digestive enzymes (e.g pespsin).
The specific shape of an enzyme is held together by the attraction between positive and negative charges on different parts of the molecule. The pH of the surrounding environment can affect the charges on the enzyme molecule. This can cause the protein chain to unfold or uncoil (denature). Even a slight change in an enzymes shape can prevent it from working properly.
Outside the optimum, enzyme activity will decrease. The enzyme will often change shape but does not normally denature. If the pH is outside the range for an enzyme, the enzyme denatures, and can no longer act as a catalyst.
Pepsin breaks down protein in the stomach and works well in acidic conditions. The stomach contents have a low pH because the presence of dilute hydrochloric acid.
The optimum pH for amylase (an enzyme in saliva, which breaks down starch) is about 7. Saliva has a neutral pH.
Pancreatic lipase breaks down lipids in the small intestine, where conditions are slightly basic (pH is greater than 7), because of the presence of bicarbonate ions.
Substrate Concentration
The rate if enzyme activity will increase as the concentration of the substance or enzymes increases. This occurs up until a saturation point occurs (i.e no free enzymes/active sites). The more substrate molecules that are available, the more frequently they collide with the active site of the enzyme molecules. The higher the concentration of enzymes the more active sites there are  to bind with the substrate. Both of these increase the enzyme activity causing an increase in rate of reaction. Saturation occur when the substrate occupies all the available active sites on all the available enzymes.

Co-factors
Many enzymes need another molecule to assist in catalysis . They help enzymes to function correctly. Co-factors work by binding to the active site of the enzyme and participating in catalysis but are not considered substrates of the reaction as they can be used again. These co-factors may be (small) inorganic ions such as cobalt, Co, selenium, Se, (can be ions such as magnesium, copper, iron) or (large) organic molecules such as some vitamins (FAD, coenzyme q10, haem). These organic co-factors are called co-enzymes.

An inhibitor can act in the following ways.
Powered by